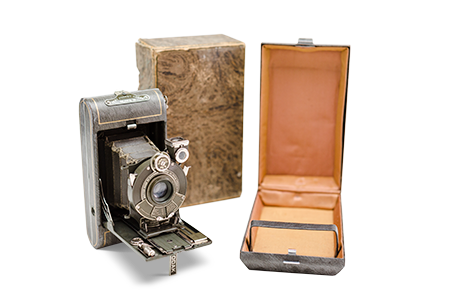 The Vanity Kodak was made from 1928 to 1933. It is a Vest Pocket Kodak Series III Camera in color: BLUE, BROWN, GREEN, GREY, and RED with matching colored bellows and satin-lined case. 4½ × 6cm exposures on 127 roll film. The original colored bellows were fragile and many were replaced with a more durable black bellows which reduce the collector value. They were packaged in a colorful cardboard box. Original cost: $30.00

This copy, from a 1928 Kodak advertisement says it all...

Swagger...aristocratic...modernity at its best...those are words to describe what is probably the most momentous addition of the season to the correct ensemble.

It is only natural that these new Kodak's, incomparably beautiful in coloring and design, should have caught the fancy of young women especially. Pre-showings at the leading women's colleges and establishments patronized by New York's elite juniors demonstrate > beyond question that Vanity Kodak's are an important contribution to the mode.

They are an utterly new version of the Kodak. They have, too, that sublime virtue of being in the latest mode and at the same time > being distinctly individual.

Notice particularly the fascinating cases of the Vanity Kodak's. The design was created by one of America's leading artists, who has contrived to give the case an intrinsic beauty of its own.

Even before one snaps a picture, one carries a new and intriguing detail of custom-accessory exquisitely in key with the current trend toward color and novelty.

As a gift, the Vanity Kodak possesses a delightful freshness of appeal. The smart girl graduate of cosmopolitan taste welcomes it as a rare combination of utility and sophistication.

The super-chic bride earns the undying gratitude of her bridesmaids with such a token as this, and if she herself finds one of them among her gifts she will yield at once to the alluring thought of carrying it on the honeymoon.

But who could blame any up-to-date woman for succumbing to the charm of these superlative creations...who could blame her for a hint or two just before her birthday? 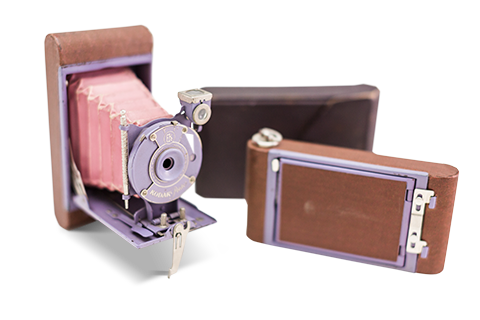 The Kodak Petite was made from 1929 to 1933. It was a Vest Pocket Kodak Model B which used 127 film and came in five colors including blue, green, gray, lavender and old rose. Several special versions were also made with special art-deco patterns on the front door including the step-pattern and diamond-door versions.

Gay as seventeen...feminine as Eve...smart as an Easter hat...is this exquisite Eastman creation. Paris inspired, it reflects the mode of Spring. Aptly named, Kodak Petite is a lovely little camera no larger than your hand.

Like all members of the famed Kodak family, it takes wonderful pictures...clean-cut, sparkling. And, so easily...you simply press a lever.

On Easter, when you stroll about in a world that's fresh from Fashion's easel, take this dainty camera with you. You'll not only add some remarkably good snapshots to your album, but you'll add a bit of subtle flattery to your costume.

The special art-deco versions are very hard to find, especially with the original colored bellows intact. Most were replaced with the more durable black bellows which reduces collector value. The step-pattern version also came in five colors, but the diamond-door model only came in brown and is very hard to find. Several other versions were produced including rare fraternal models, a lightning bolt model (see Coquette) and several one-of-a-kind models. 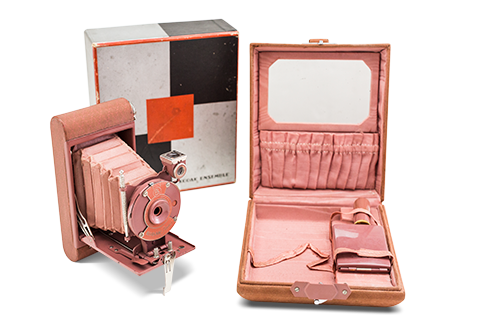 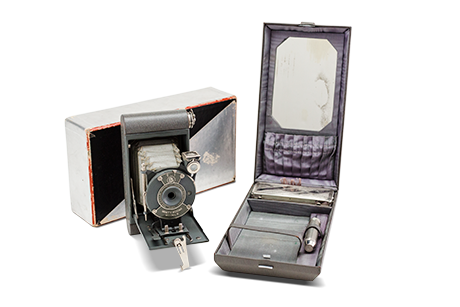 Many of us are already thinking of the Christmas list. This year, in addition to the regular Kodaks, there will be a choice of several models in charming color combinations. The Vanity Kodaks- in five colors, announced in June, are now well known and their popularity will naturally increase. Now, just in time for the gift season come the Vanity Kodak Ensemble also in alluring colors.

The Ensemble pictured above is a novel departure in the realm of unique gifts. Complete in every detail for both make-up and snap-shots- all contained in an equisite grained leather, hand-strapped case and in three colors of just the right shades- green, beige and gray.

Notice the contents of the silk-lined case: mirror, change pocket, combination powder and rouge compact, lipstick and Kodak. The petite Kodak makes sharp, clear-cut negatives 15⁄8 × 2½", from which handy little contact prints or surprisingly good enlargements can be made.

Vanity Kodak Ensemble c1928-29 A Vest Pocket Kodak Model B camera with Lipstick, compact, mirror and change pocket. The Vanity Ensemble came in 3 colors, green, beige and grey and is rarely found complete as shown. My collection includes the green (shown), and grey models...I am still looking for a beige model! Original cost $20.00. 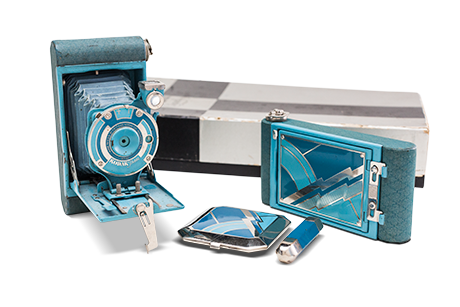 Have you ever seen a purple lightning bolt?

The Coquette came in blue...but a handful of green models exist, and recently this purple model surfaced. There have been rumors of other colors as well, but none have ever been seen. The blue model comes in two variations, the blue/aquamarine and blue/blue models shown on the right.

This set recently became complete thanks to Rick Vogan, who saw my web page and informed me of a lone compact he saw at an antique store in Lincoln, Nebraska. What a small world the web has made...I have been looking for this compact for over 10 years! Thanks Rick!

The Kodak Coquette was made from 1930-31. It is a boxed set including a blue Kodak Petite with special art-deco lightning bolt design, matching compact with same design, and blue lipstick holder. It came packaged in a black and silver deco box. The set is very hard to find and is rarely found complete as shown. The green model is even harder to find and has never been seen as a complete set. The purple model is probably a one-of-a-kind; it was owned by a Kodak employee and was probably made special for him. 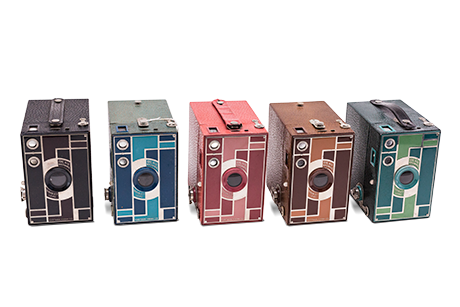 The Kodak Beau Brownie came in two models, the 2 and 2A and were made from 1930 to 1933. They were styled by the leading American designer Walter Dorwin Teague, who created a modernistic geometric pattern in two tones on the front panel, which was enameled in a color matching the leatherette covering of the rest of the camera.

The Beau Brownies came in five colors including old rose, blue, black/purple, brown/tan and green. The rose and green model were only made from 1930 to 1931 and are harder to find. Also available was a matching leather case. 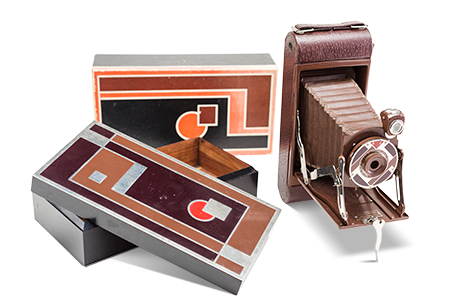 Made from 1930 to 1931, it is a special version of the No. 1A Pocket Kodak Junior Camera which was introduced for the 1930 Christmas season. The camera is covered in brown leather, and is decorated with an enamaled metal inlay on the front door and the faceplate.

It comes packaged in a cedar box, which has a matching art-deco design on the top. An original cardboard box also follows this design. Original price...$15.00 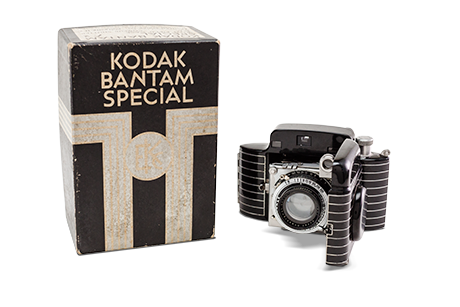 The Kodak Bantam Special Camera was made from 1936 to 1948 and is a wonderful piece of art-deco design. It was made in two versions, the first from 1936-40 came with a Kodak Anastigmat Ektar f2 lens and a Compur Rapid shutter and is the most common. Approximately 19,000 were made. The later version had a Supermatic shutter and was made from 1941-48, only about 8,000 being manufactured. The Supermatic has a much inferior shutter, stamped metal peices rather than machined like the Compur, making them nearly impossible to fix. The original price was $87.50 including the field case. 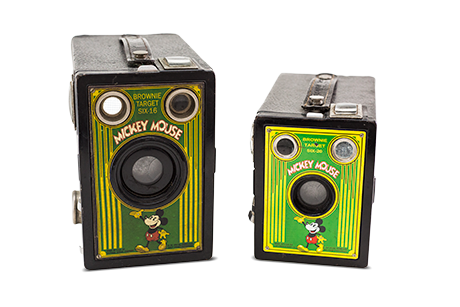 The Kodak Brownie Target Six-20 and Six-16 Mickey Mouse cameras are very rare. These models were unknown until 1995 when they showed up at antique dealers. Both Disney and Kodak have no record of them. One odd detail -- the camera body and more importantly the name "Brownie Target Six-20" or "Six-16" place it no earlier than 1946, yet the name "Walt Disney Enterprises" in the corner is a usage that Disney discontinued in 1939. At least one example is known with a box. There are less than a dozen of the Six-20 models known and only a few of the Six-16 models. Some have screws holding the faceplates on, some have hexnuts. It seems likely that these were made up as prototypes and never officially approved or produced -- or that only the faceplates were made, and much later someone discovered them and attached them to the correct cameras and began trickling them onto the market. The faceplate appears to be a decal attached to the metal surface, then protected by a thin layer of plastic. The rest of the camera is completely standard.